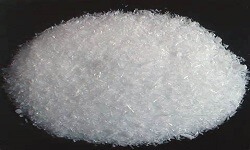 Urea, also called carbamide, appears as white granules and has a chemical formula of CO(NH2)2. It is highly soluble in water and produces a neutral solution when dissolved. It is widely used the agricultural and chemical industry as fertilizers and raw materials respectively.

In the industrial scale, urea is produced from synthetic ammonia and carbon dioxide. The process consists of two main reactions: the first reaction leads to carbamate formation and the second reaction is the urea conversion.

In the first reaction, liquid ammonia is made to react with gaseous carbon dioxide at high temperature and pressure, and ammonium carbamate is formed.

The second reaction is the decomposition of ammonium carbamate to produce urea and water.

It is widely used in the agricultural industry as fertilizers due to it having the highest nitrogen content among all solid fertilizers. It is also used as a component of animal feed to promote growth in farm animals.

It is used as raw materials for the production of chemicals used in marine plywood such as urea-formaldehyde resins and urea-melamine-formaldehyde.

Urea is used to manufacture urea nitrate for applications such as explosives. It is also used in cosmetic products such as moisturizers, hair conditioners, skin creams etc. Furthermore, it is also to reduce the emission of NOx pollutants in vehicle exhaust systems.